We will be taking special precautions because of Covid-19 including spreading out patient appointments and reducing the number of patients in our waiting room at any one time. We will be installing air purifiers in each exam room and our waiting room as well as decontaminating each exam room after a visit. If you are over age 65 or have other health issues that put you at increased risk of Covid-19 complications we encourage you to make a telemedicine visit rather than come to the office. Please wear a cloth or surgical mask for your appointment and minimize the family accompanying you for a visit.
For any question please call us at 313-582-8853.

We have recommended removal of the tonsils and/or adenoid. Here are the answers to some of the more commonly asked questions.

WHAT IS THE ADENOID?
The adenoid is a single lump of tissue located at the very back of the nose. The adenoid is made from lymphoid tissue, just like the tonsils. The adenoid cannot be seen through the mouth. To see the adenoid a mirror, small telescope or x-ray is needed.

WHY ARE THE TONSILS REMOVED?
The tonsils are removed either because of recurrent infection or because they are causing obstruction (blockage). We consider surgery to be a last resort. It is used for failure of medical therapy or if medical treatment is inappropriate. Considerations include the number and severity of infections, complications of tonsillitis, such as an abscess or other illnesses that increase the seriousness of tonsillitis. Most cases of tonsillitis are caused by Streptococcal bacteria (strep), although throat cultures do not always come back positive for this. The tonsils may also be enlarged without necessarily being infected. This is called tonsil hypertrophy. If the tonsils (and/or adenoid) are large enough, they may interfere with breathing (especially when asleep) or eating.

WHAT IS SLEEP APNEA?
Enlarged tonsils and adenoid are one of the most common causes of sleep apnea, especially in children. Patients with sleep apnea intermittently block off the flow of air to their lungs while they sleep. This happens when the throat muscles relax during sleep and breathing forces create a weak suction that causes the tonsils and throat tissue to collapse in. Loud snoring is a clue to this problem that affects children and adults. There may be some pauses in breathing or choking and gasping sounds made during sleep. Sleep apnea is a potentially serious condition that can affect the heart, lungs and blood pressure. Patients with sleep apnea are often tired during the day and fall asleep easily. Some children have behavioral problems or difficulty concentrating in school. Removing the tonsils and adenoid often cures the sleep apnea in this situation.

WHY IS THE ADENOID REMOVED?
The adenoid is often involved with tonsil infections and contribute to sleep apnea. The adenoid may also cause blockage of nasal breathing and occasionally sinus problems. In children 4 or older, removal of the adenoid may help clear up recurrent ear infections or fluid in the middle ear.

WHAT IS A TONSILLECTOMY?
A tonsillectomy is a surgical procedure where both tonsils are removed. This operation requires a brief general anesthetic. The patient’s mouth is held open using a special device and the tonsils are dissected out. Once the tonsils are removed from the muscles of the throat, bleeding is stopped using electric cautery or sutures. The procedure normally takes around 30 minutes. When a tonsillectomy and adenoidectomy are performed together it is often called a T&A procedure. 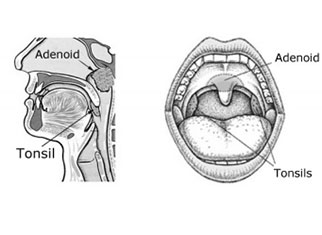 WHAT IS AN ADENOIDECTOMY?
An adenoidectomy is the removal of the adenoid. This operation, often done at the same time as a tonsillectomy, also requires a brief general anesthetic. A special device is used to hold the mouth open. An instrument is then passed through the mouth, behind the palate and into the area behind the nose. The adenoid is removed and any bleeding is stopped.

WILL REMOVING THE TONSILS AND ADENOID AFFECT THE IMMUNE SYSTEM?
The tonsils and adenoid are made from lymphoid tissue, which is part of the body’s immune system. There are around 300 other structures in the head and neck area, called lymph glands that are
also made from lymphoid tissue. Since the tonsils and adenoid represent only a small fraction of this tissue, there is no noticeable effect on the immune system. This has been proven with research, which clearly showed that children who had their tonsils and adenoid removed were no more likely to get infections than other children. In fact those patients who have recurrent infections of the tonsils, adenoid or ears will often get far fewer infections after the tonsils and/or adenoid are removed.

AM I TOO OLD TO HAVE MY TONSILS REMOVED?
There is no age limit for this surgery. The tonsils often persist into adulthood, and can cause recurrent infections and sleep apnea. As long as the patient’s general health is adequate a tonsillectomy can be performed without difficulty.

BEFORE SURGERY
Patients are evaluated by us and a decision is made that a tonsillectomy and/or adenoidectomy is necessary. Our office then arranges the surgery. It is important to inform your surgeon about any medical disorders or bleeding problems. Blood thinners such as aspirin, plavix, ibuprofen or other similar drugs should be stopped to surgery. If you take any of these please inform your
surgeon. The patient should have nothing to ear or drink after midnight on the night prior to surgery unless otherwise specified. Please show up at the scheduled time arranged by the hospital/surgery center. There are forms to fill out and patients are seen by a nurse and anesthetist prior to the procedure.

DURING SURGERY
Children are put to sleep using an anesthetic gas with a small mask. This is a painless, gentle and quick method. An intravenous line is then started to give medication and fluids to the patient. Adults are put to sleep using the intravenous line rather than a mask. The procedure is then performed by your surgeon. After the surgery is finished, the patient is woken up and taken to the recovery area. Parents are allowed to see their child in the recovery area once they are awake and stable. The intravenous is removed when the patient is stable and drinking fluids. Patients are usually discharged a few hours after surgery. You cannot drive for 24 hours after anesthesia so please arrange transportation.

AFTER SURGERY
On leaving the hospital/surgery center you will be given prescriptions for medications. This will usually include a strong pain medicine, and often an antibiotic. You should fill these prescriptions as soon as possible so they are available. No aspirin, ibuprofen or similar products should be used until at least two weeks after the procedure.

When patients return home they should drink fluids frequently. Keeping the throat moist helps healing and reduces pain. Common complaints after surgery include pain, nasal congestion and bad breath. After tonsillectomy patients should expect significant pain for around 7 – 10 days, which is felt in the throat and ears. You should use the prescribed pain medication as directed for this discomfort and anesthetic lozenges may be helpful. Patients are encouraged to drink fluids and eat soft foods, avoiding anything spicy or acidy. Popsicles and frozen ice treats also provide fluids and are soothing. Some patients will not eat solid food for a few days. This is acceptable as long as the patient drinks and does not become dehydrated. Soft foods are encouraged and foods that can scratch the throat, such as potato chips, pretzels, etc. should be avoided. Milk/dairy products may thicken mucus and if this causes discomfort should be discontinued. Patients are allowed only light activities for two weeks after surgery. Heavy straining or rough play may cause bleeding. Bleeding is the most important potential complication following surgery. It occurs in 3% of patients and may occur up to two weeks following the procedure. If a patient spits up blood or vomits blood they should be taken to the hospital ER for evaluation. Once the first two weeks have gone by normal activities can usually be resumed. If you have any concerns or problems following surgery, please call our office for assistance.
In case of an emergency, we are available 24 hours a day through our answering service. You should remember that no surgery is 100% effective and that there are risks to all surgical procedures. Since some risks only actually occur very rarely, they cannot all be mentioned. We hope this pamphlet helps you better understand your condition, the recommended procedures and its risks. If you have any questions about your procedure or its risks please call us prior to surgery at 313-582-8853.

Let Us Help You: